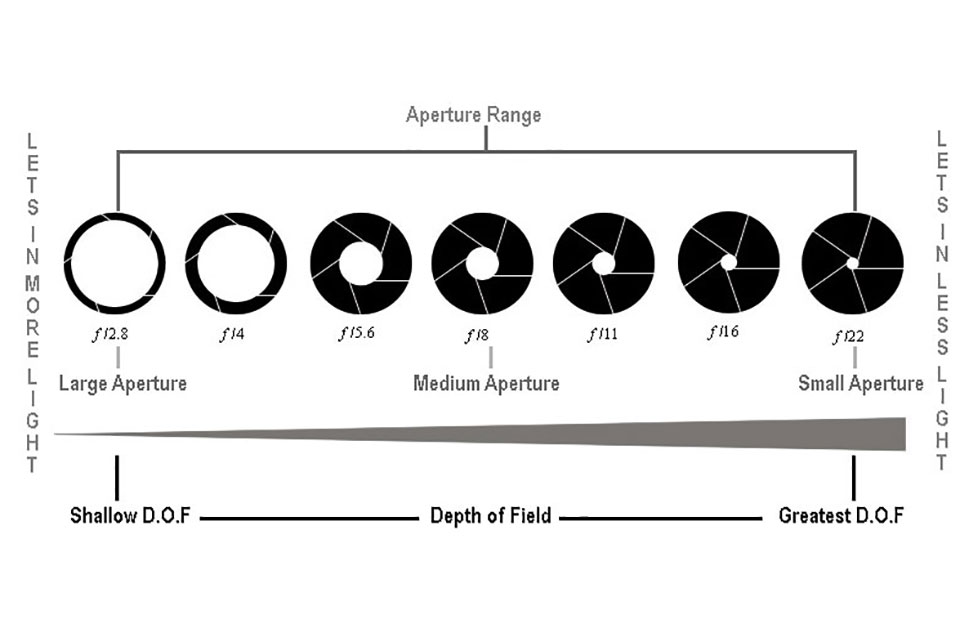 Aperture and depth of field

As explained above, aperture defines how large the hole is through which the sensor sees the world. In photography, aperture is measured in units called F-numbers, F-stops or whatever else with this F-. Without going into details about what exactly this F- is (I would need to look it up myself to explain, physics again), all you really need to know is the following. The smaller the F-number is, the larger the aperture hole is, and the more light reaches the sensor. From now on by “large aperture” I will mean a large aperture hole (and a small F-number), and vice versa by “small aperture”.
In practice, depending on the lens you have, you usually use F- values from about F4 (large aperture) to approximately F16 (small aperture). Some quality lenses support much larger apertures, for example my favorite Nikon lenses (85mm and 50mm) get to F1.8 or even F1.4. These are very light-sensitive lenses saving you in dark conditions.
In addition to the amount of light reaching the sensor, aperture affects another very important aspect: the depth of field. Imagine several objects located at different distances from the camera. Say a person 5 meters away, a bear 7 meters away, and a tree 10 meters away. The camera sees them all, but the question is: which objects are in focus? The larger the depth of field is, the more objects are in focus. And the smaller the aperture (the larger the F-number) is, the larger the depth of field is. Thus, to get only the person in focus (with the bear and tree out of focus), focus on the person and set the maximum aperture, such as F1.8. This is great for portraits with nice blurred backgrounds. To capture the whole scene, you also want the bear and tree in focus – use a greater F-number, such as F8 or more.
Note that aperture is not the only parameter affecting the depth of field. For example, the distance between the photographer and the subjects also plays a very important role. The closer you are to the first subject, the smaller depth of field becomes.